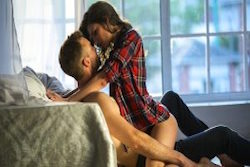 There are a multitude of reasons why women cheat on their spouse, but one of the most common reason we have found is because they no longer feels a desire for the person she is in a relationship with.  She will usually still be in love with her spouse and will either be unwilling to, or too scared to, leave them for that reason.  This tends to be especially true of women that are married have children and have already spent a lot of time and effort in building a life.  These women will ultimately end up making one of the biggest mistakes of their lives by trying to juggle two or more lovers just because they can’t seem to justify having to give up their significant other so that they can have a need or desire fulfilled that they aren’t getting fulfilled by them anymore. Women tend to be emotional cheaters more so than men.

Whether you have been cheated on before or not, there isn’t a single reason or excuse that would ever make it ok for anyone, man or woman, to make the decision to cheat on their significant other.  If you are ever faced with the choice or desire to cheat, you should either leave that person and move on, or discuss the problems/issues you’re having within the relationship with that person so that you can possibly resolve those problems/issues without violating that person’s trust and/or end up causing them deep pain.

If you suspect an affair or have doubts, let us confirm them for you.